A downloadable game for Windows, macOS, and Linux

" Score-hoarding arcade jumparound for one or more players. You have been sentenced to death in the Bit Pit, where blocks of various deadliness are thrown down upon you like old boots down a well. The blocks build up, allowing to climb away from the pool of acid below. "

This is a quick, jam-quality, proof of concept game made over the course of a few days to demonstrate and try out an idea.

It's 1-4 player local co-op. You can use a keyboard or gamepad for singleplayer, but you'll need a gamepad for each additional player.

All settings can be changed at any time using keyboard keys 1 through 0.


Copyright 2015 Logy Bit. This item is not authorized for posting on Steam, except under the Steam account named kayaorsan

Works and it's damn fun.

As said below in the comments, try with wifi turned off

Found this from someone in the comments: if you get the code error thing, open it with wifi off

Yo try with wifi of

May I use the sprites in my game?

very simple, but the game GREAT!

can this be online mode that would be amazing!

Just checked out the demo, and I have some QOL suggestions for the final version.

I find I'm just sitting around most of the time, staring, and waiting to have to move. It takes a little while for the blocks to really start dropping, and make you be on semi-alert. Most of the time I die, it's because I lost interest in waiting for something to do.

So - Here's some ideas I had to spice things up, and maybe fix this issue.

1. Make the falling blocks always target near the player character, so they can't just sit around ( and risk getting bored ) You could also add a speed feature, maybe difficulty levels ala Tetris, where you could start at a higher difficulty, and therefore; the speed / aim of the falling blocks.

2. Another thing I found myself doing while waiting to have to move, was trying to push the blocks. Idky, but it feels second nature to be able to push, or manipulate the blocks in some way.

Perhaps you could add different styles of blocks, allow us to push them around to maybe make a ledge to stand on, or make special ones that, when pushed together might provide a benefit to the player, maybe increased jumping, movement speed, maybe they can move more blocks - etc. I think if you did that, impose a rule where you can only push 1 block if it's by itself, and not when there's more blocks behind it. That way, they wouldn't be able to just push all the hazards away at any given time.

3. Random powerups that fall instead of blocks and hazards.

I think if you had random positive drops for you, that would give you more abilities ( maybe even score multipliers ) that would also spice things up.

All in all, I like the concept - but I feel it takes too long for the game to actually pick up. Also, the widening/thinning of the player area is nice, but I don't feel like there's a " correct " size to play - too wide makes it very very slow and boring, while too thin provide little to no challenge as well, since you can easily climb things.

thanks for the neat demo, looking forward to where the concept goes from here!

I made a video! I hope you won't mind if I share it to my Youtube Channel I want to share it with my Friends and to others to.

Thank You for the Game!

I'm having a weird problem with the game. I try to load it up but for some reason the screen goes black and then it just shows a bunch of scripts and commands and that's it. I'm just stuck on that screen and I can't play the game. Can you please fix this if you see this comment? Thanks :D

Really loved playing your game! Simple enough idea, with a lot of twists and turns that make it so fun you just keep wanting to play!

Did have a quick note I wanted to add, that may possibly help others. At the main menu, I would brighten the lettering for the keyboard inputs just a little. Didn't realise they were there for a good minute. Best of luck!

I would love to play, but it fails to execute at line 1?

Great game, I found the little hidden soundtrack you had there, with the poorly played flute, gotta improve those skills.

This game is VERY entertaining and I'd LOVE to see more come out of it. I give it an 11/10 on YELP.

Well um is it 2 player atleast on keyboard?

This game is great but it would be awesome if there was more ways to arm other players, like launching them with a punch or picking up and throwing explosive blocks at them

This was fun. The visuals, while simple, worked really well for what was going on. Neon against black is always a nice choice. The music was pretty good as well, though the menu was louder than in-game for some reason. A fine way to pass time alone or with others in competition.  Good job with this overall.

Keep up the good work and have a video.

You know what would make this game even more awesome, if it pulsed to your music or blocks dropped to the music you were playing

i cant play :( for some reason when it opens it just shows a bunch of text and nothing happens i even pressed every button and still nothing happened please help (i'm on a mac)

image of the error:

yep exactly, it's work fine without internet, thank you!

Awesome demo, love the entire idea. Looks like it implies multiplayer? If so, that would make a big difference to the play. I suggest that if you do have multiplayer make sure you have features where multiple people are required. Nonetheless, this was extremely enjoyable and I would love to see this expanded!

the game looks nice but when I launch it from the itch app on OS X I get stuck on a black screen with some kind of error text.

I gave Bit Pit a quick playthrough on my weekly series Games and CHiLL. The game is so simple and so much fun! I want to give it another quick playthrough with my girlfriend who's not much of a gamer but would likely love games like this.

THE STORY IS SO SAD! Great game though! Loved playing it

What the hell is that flute music ? XD

I think i found an Easter Egg.

Hello! I wonder - how to contact developer by email? :) 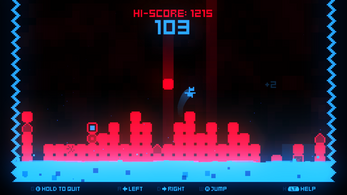